You are here: Home › Transport › Securicor 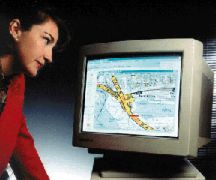 In September 1996, Securicor Datatrak celebrated its first ten years in mobile data communications on an optimistic note. The Swindon-based pioneers of the Automatic Vehicle Location (AVL) System, are doubling, year on year, the number of subscribers on their mobile data network. With over 13,000 vehicles fitted with Datatrak technology,the integrated network is the largest of its kind in the UK. Conversion of this network into a full, two way capability is nearing completion while overseas, entire networks are being built to the Datatrak specification in Argentina, the Netherlands, Belgium and South Africa. Today, Datatrak is the AVL system most widely used by all three UK emergency services, including eight ambulance services, six police forces and the County of Avon Fire Service.

Securicor transports 400 billion pounds of valuable goods and cash every year. Some of the contracts are with banks, where “goods” are easily disposable. This makes Securicor the target of organised attack on two main fronts: during loading and unloading; and during transit. Securicor had tackled attack by a series of procedural methods such as varying collection and delivery times, and has armoured the vehicles and the personnel in various ways. In 1985, Securicor began searching for ways to increase protection for its “Cash in Transit” vehicles. The brief was ambitious. Any vehicle, whether stationary or travelling at speed, had to be located to within 50 metres, and all transmitted data had to be accurate, reliable and protected from interception and corruptionA critical requirement was the ability to track vehicles, detect variance from pre-planned routes and unscheduled stops, and to find hijacked vehicles. Securicor decided to set up a dedicated network of radio base stations across the UK, connected back to its control centre. Essential requirements of the network were:

By 1990, over £19 million had been invested in an extensive nationwide communication network which fulfilled requirements.

A vital component of the Securicor Datatrak network is Case Communications’ DCX system, located at each of the regional centres and at the disaster recovery site. Details of each vehicle location is received and forwarded to the appropriate customer.An important factor in the choice of DCX was Case’s ability to incorporate key Datatrak requirements into the product, and to provide the level of support needed. DCX uniquely fulfilled all Securicor Datatrak’s requirements: a network technology for processing a large number of small messages and routing them according to easily configurable parameters, which could also be adapted to suit customer needs. DCX’s reliability and flexibility were also important.

“DCX 870 offered us an integrated package to distribute our data to our customers securely.  It also offers the tools to ensure this is reliably achieved.” said Peter Paul, Securicor Datatrak’s Senior Network Engineer.

The success of the Datatrak Network was such that Securicor Datatrak has spawned off a new business unit which now offers tracking services to other companies. The use of the network has also migrated from being primarily a security application to a range of other business functions. Now, far from being simply a vehicle tracking system, Datatrak is a versatile management tool, a factor which is key to its success. The functions the system performs range from temperature reporting in refrigerated containers, to complex fleet management applications.For the customer, a PC running dedicated software, displays a computer-based Ordinance Survey map on screen showing the precise position and operating condition of all fleet vehicles throughout the UK. Immediate and positive action can be taken in response to incident, and stolen vehicles can be tracked and recovered successfully.

The new ‘Datamail” two-way messaging system gives companies an easy-to-use, economic alternative to the cellular -networks when they have to communicate with their drivers – and vice versa.